(header courtesy of the royale website)
It got late to go to the grocery store or even fix dinner, so Ron and i went to the Royale. 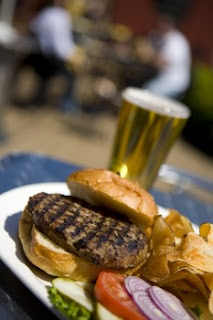 (photo courtesy of the royale website)
We split the Juniata (veggie burger made with match "meat") and an east west club (with match "meat" chicken). i ordered the sweet potato chips as my side and they were perfectly done (sometimes they are too done). the food is always good! next time, its time to split the fish tacos again (best fish tacos in St. Louis)!
Posted by claire at 8:20 PM 4 comments:

Last night Ron and i split a ride to the downtown St. Louis Post Office to drop our 2009 taxes off. We were both very last minute this year. Thanks to taxslayer, it was fairly quick
and cheap, only 14.95! Looks like the Puerto Vallarta trip is paid off after Ron finished his, 2007, 2008, AND 2009 taxes!!
Afterwards, it turned into one of those stupid dinner nights, where everything goes wrong trying to decide on where to go for dinner and when we get there, it's either too pricey for what it is, of the doors are locked, even though they should still be open for dinner. ugh!! so, it was a DEL TACO night.
Posted by claire at 3:23 PM No comments:

Here is a peek at what Claire and I had for dinner tonight: 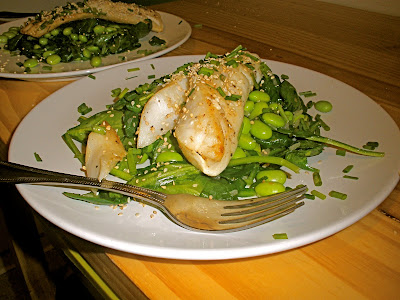 MMMMMMmmm...tasty.
A few weeks ago we were watching Simply Ming on the local PBS. His theme that day was "sesame" and one of his dishes was Sesame-Chive Butterfish with Buttered Edamames and Spinach. It looked delicious and I was obsessed with making it. I looked into actually getting butterfish but it seemed a bit difficult around here if not a bit risky, since there are many different kinds of fish that might be labeled as "butterfish". These would include "escolar" which is known to cause abdominal cramping and LOOSE STOOLS. SO, in our recipe, cod seemed a suitable alternative.
I'm happy to say that after more than a week of having the ingredients on hand and waiting for a night when it seemed like the right time to make it, we finally got it together, as evidenced above. I thought it was quite nice. Claire said it was "interesting" or "different" or something like that, but she cleaned her plate, so that says something. And so far, no cramping, etc. But it might be that all of the poison in the edamame is keeping that at bay.
Bon Appétit!
Posted by ron at 11:39 PM No comments: 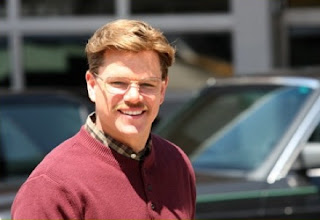 Ron and i watched the informant last night. i was so confused the whole movie, but i think that is the point. Matt Damon was great in this role! i loved all of his voiceovers of the characters thoughts!!
"I don't like wool on skin. Not even that merino wool they have at Marshall Field in Chicago. Ginger likes it because it's formfitting, but she likes avocados. And who wants that texture in their mouth? "
The other thing about the movie was the characters hair. i kept trying to figure it out, turns out it is supposed to be a toupe!!
Posted by claire at 11:37 AM No comments:

i turned 31 this weekend.
Friday, April 9 (my official birthday) Ron and i split a beautiful Nicoise salad and artichoke toasted ravs at Katie's Pizza for lunch! even the bread rolls were amazing!!
Friday night, after flat ironing Ron's hair (creepy), 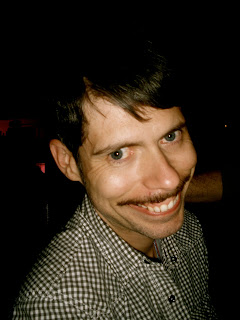 Ron and i attended the March Moustache Party Bash at the Royale!! There were shots to be had,
DJ Cliffe and DJ Early were spinning some killer tunes 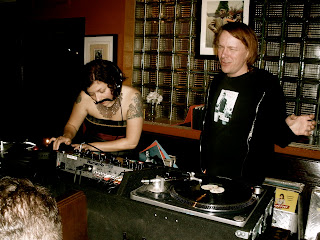 and prizes were handed out for the moustache awards! i did win creepiest moustache for the individual eyelashes i had stuck to my upper lip. 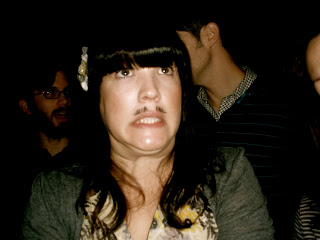 Saturday, i invited my peeps out to Tower Grove Park for a picnic. i wanted everyone to quilt the earth with their beautifullly colored blankets 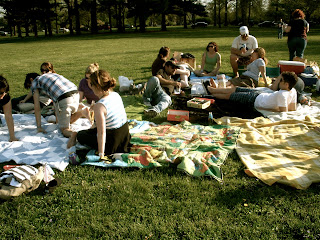 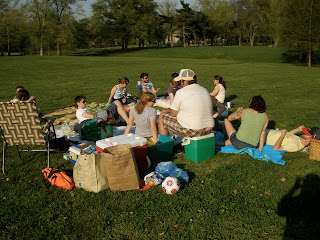 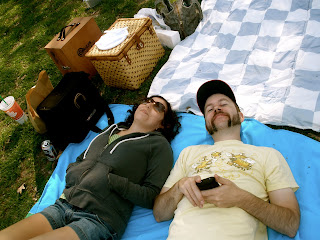 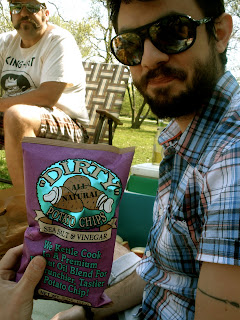 and play some rec club games!!
there was frisbee 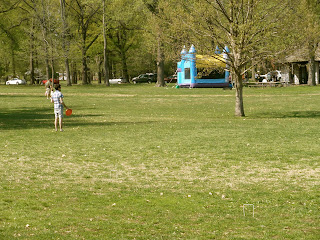 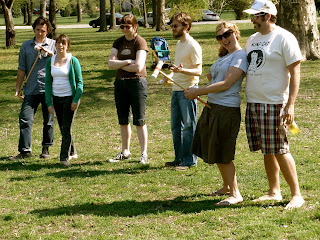 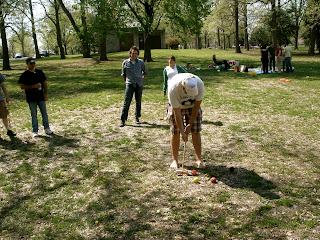 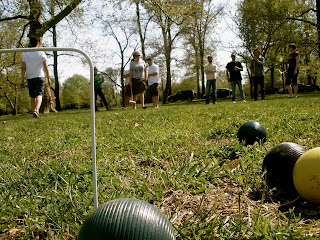 and the day was perfect with sunny weather!
Sunday night, we bbqed out at my sister, Holly's house. i found out ,my friends, the mosquitos are out and about!!
It was the best weekend ever!!
Posted by claire at 11:37 AM 2 comments: 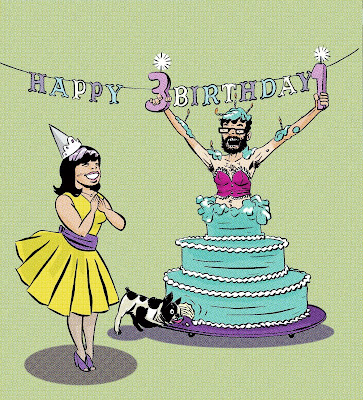 Claire, I hope you had the best birthday weekend ever. I'm pretty sure you did, because in all the excitement, I'm just getting around to posting this now.
I love you so much and wish you many, many more wonderful, fun-filled years
Posted by ron at 7:39 AM 5 comments: 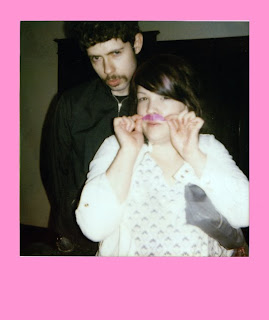 (Ron and i heading out for the Stache Bash 2006)
This year, the Fourth Annual March Mustache Party will be at the Royale April 9, 2010 (MY BIRTHDAY). Ron and i attended our first mustache party (before we started dating) at a random house party and not even in March. i think i might have drawn mine on that night. A game of spin the bottle took place (Ron and i never kissed that night) and a snowball fight as the party was ending (Ron pegged me in the face with a snowball. is that LOVE or what?).
We attended the first two March Mustache Parties that took place at Snowflake. We missed last year's party at the Royale because we were in Austin.
Posted by claire at 9:12 PM No comments: 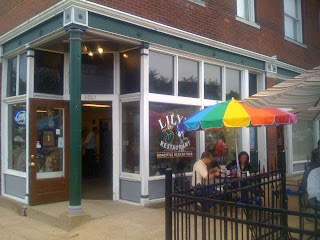 Today, Ron and i split lunch at Lily's off South Kingshighway. We split the Tilapia and shrimp a la mexicana, and i ordered a cheese tamale on the side. DELICIOUS!! it's been a while since we've been to eat there, because every time we've tried to go back, it's been a Monday, and it's closed! We will be back!
Posted by claire at 12:18 PM No comments:

Lunch in the park 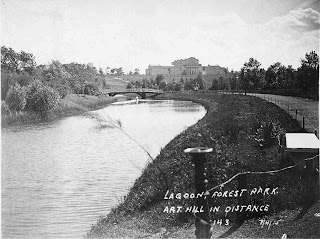 Yesterday, Ron and i split lunch in Forest Park by the water basin, just before the rain came! Being around the water basin at the bottom of Art Hill makes me feel like i am in Europe.
When we first started dating and Ron was working at SLAM, we used to eat on Art Hill, during his lunch breaks. When the weather is nice, it really is so relaxing and a nice break from being inside!
Posted by claire at 12:16 PM 1 comment:

Asking yourself, what's for dinner? 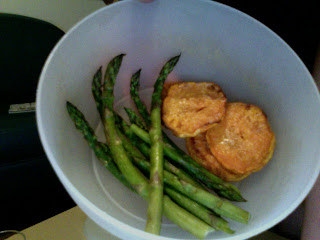 ( the leftovers)
ronneo and i made yummy dinner tonight! tuna steaks cooked in a skillet with our favorite Soyaki (we are on the Hawaiian flavored now, both are great)sauce from Trader Joe's, and we used the Forman grill for the sweet potatoes (cut in 1/4 inch slices for 25mins.)
and asparagus (4-5mins., it will still be crunchy!!) we added a touch of butter and sea salt for flavor! i can't wait for the stinky pee!! Does anyone else experience this?
Posted by claire at 7:23 PM 2 comments: