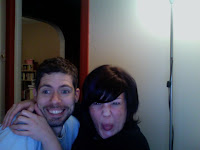 Dancing with the Blog 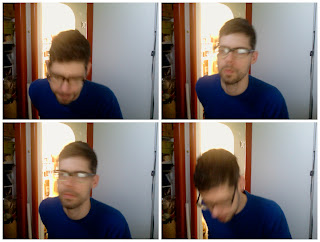 To get the proper effect, make sure "Autumn Sweater" is playing on the music thingy.
(I'm afraid that the webcam means that this blog is just going to become random pictures of us doing mundane things in this chair. On the one hand, I apologize; on the other, we're both pretty enough to make it work.)
Posted by ron at 11:24 AM 4 comments:

waiting for a tow truck to unlock ron's car... 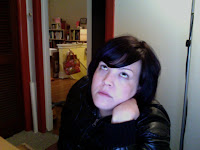 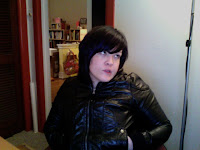 Posted by claire at 7:55 PM No comments: 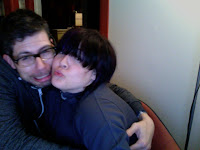 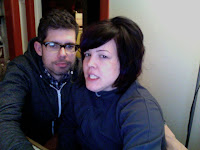 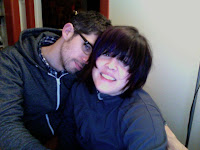 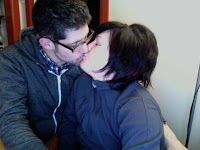 ron and i discovered the camera built in to his NEW imac. yay!
Posted by claire at 10:46 PM 3 comments:

while waiting on a client at work this morning, laura came back to tell me andrea was sick and they needed someone to go to an alive magazine photo shoot. she said it would be a prominent man of st. louis and i would need to powder his face and apply product to his hair. after my client, and collecting some items from the salon, i headed downtown st. louis. i arrived at photographer, Tuan's studio. after setting up, Reshma, an art director from alive magazine briefed me on the look of the shoot.
it was a guy named Nate from a sneaker co. called Greedy Genius.

He helped Nelly start up apple bottom jeans. after that was going well, he left to start a tshirt co., and then the shoes. he was really nice, he said he had never had makeup on his face before, he thought it was cool that the makeup could cover up his blemishes from a stressful week. we powdered his nose and shiny, shaved head and he was off to the camera. 20 minutes later, we were done. quick and easy. such a rush! It was one of those days "at work", when you realize this is why you are doing what you do!
i also got free tickets off kdhx for the faint show, on sunday, at the bluenote in columbia, mo.
-claire
Posted by claire at 8:49 PM No comments:

...Ron,
i'm listening to the music on our blog, and missing you.
i love you,
claire
Posted by claire at 10:24 PM No comments:

never leave your camera at home... 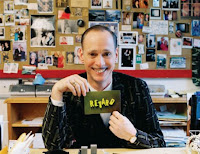 ok, since ron isn't going to blog about it, i will. sunday, ron and i went to companion bread for lunch. driving on kingshwy, ron passed up the turn for maryland plaza, and made a u-turn to come back. waiting to turn onto maryland plaza, this man was crossing the street, ron says "nice fucking john waters dude!", at second glance, ron said " wait, that is john waters!" i told ron to roll down the window.
i yelled, "Hey John!" He turned and waved! Ron remembered he was in town for a talk and art show, probably staying at the chase park plaza.
funny thing, ron is never the celebrity spotter.
i don't know what it is with the williams girls and john waters, but my sisters, holly and beth have seen him the last two years they have gone to provincetown, ma.
"Hey John! i think the williams girls should star in one of your films, something tasteful!"

ron and i have been busy watching many movies this week.
sunday was der golem.
monday, right after 'heroes' was over, we ran up to galleria to see 'nick and nora's infinite playlist'. ron and i both liked it, which is rare. a hipster love story, two teens fall in love because they both like the same music. ron commented how fun it would have been to be a teenager in new york city. he would have gotten so lost with his sense of direction. comments overheard afterward "that movie was perfect", said a high school boy. "yeah, i bet that soundtrack is really good", said his friend.
tuesday we both had the day off. we watched 'made of honor'.
i think romantic comedies are getting to be way too predictable, so it was just that predictable. ron and i are still trying to figure out what they did to patrick dempsey to make him look younger for his college years. his eyes looked really squinty, so we think they pulled his face back. creepy!!
later that night after our favorite dinner of couscous crusted salmon, ron and i watched the 2008 update of the original Halloween, by Rob Zombie. Ron made the comment, "he always has to white trash it up". some scenes were matched up almost exactly to the original, down to the house and street. but altogether, not that scary of a movie, just gorey and "trashy".
on the way home from work last night, i decided ordering pizza would be the easiest thing to do for dinner. which reminded me that ron and i had rented a movie called 'pizza'. it's a very low budget film starring Ethan Embry. i had no idea that Ethan embry could sing. it was really cheesy (no pun intended), and really bad!
we do have one more rented movie to watch 'the hitcher', another remake.
stay tuned...
Posted by claire at 9:35 AM No comments: 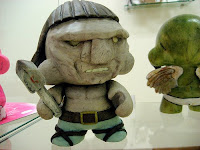 if you ever find yourself watching this movie, know that there are 5 chapters. i love silent films and i enjoyed the love story in this one, but overall it was a little slow. i'm glad ron finally got to see it after all these years of watching him draw and sculpt the golem. i'm also glad i got to be a part of it with him.
Posted by claire at 12:45 PM No comments:

Most anticipated film of the season 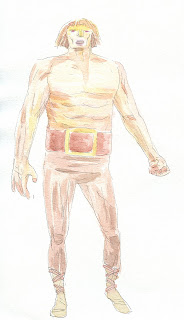 We're going to see Paul Wegener's 1920 silent film Der Golem tonight at the Webster Film Series. I've been waiting to see this movie since I was about 8 years old, when I had a book about monster movies that had a few pictures of the Golem in it. I started drawing him a lot in the last few years, but never got around to seeing the film. Here's hoping it was worth the wait. More later....
Posted by ron at 4:27 PM No comments:

Friday night we went to the 20th Anniversary Party/Art Show for Star Clipper, the best little comics shop in this town (and many others.) The owners, Ben and A.J. Trujillo, invited several of the local comic book creators (and me, which is too kind) to create and show pieces based on any of the following themes: 20 years, 1988-2008, comics, Star Clipper, or St. Louis.
I and a couple of my comic club drawing friends decided to take some of the drawings/characters we had done back in (or around) 1988 and update them in some manner. (Keep in mind that these other 2 guys are actual professional comic book drawers...) 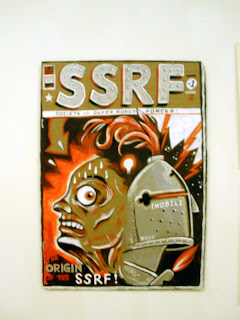 Dan Zettwoch: Cover (2008) to the premier issue of Society of Super Robot Forces 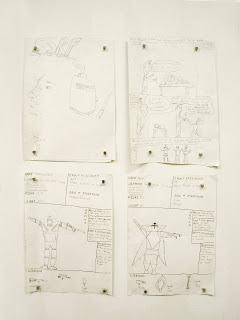 Dan Zettwoch: Cover and pages (1988) for premier issue of SSRF 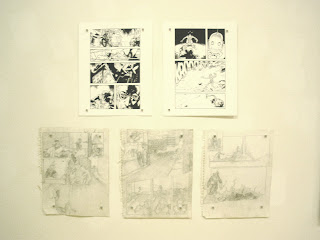 Brian Hurtt: I forget what the title is here, but this is another updated piece.
(top) Pony-tailed motorcycle guy vs.robot/armor guy (2008)
(bottom) same (1988) 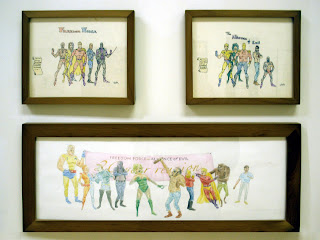 Here are another couple of pieces with a different approach: 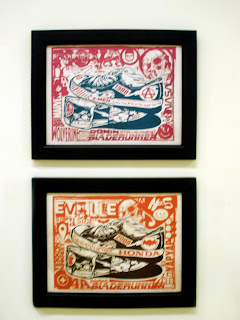 Brian Yap: The shoes and one other thing stand the test of time (that's not the title, I forgot to remember that.) 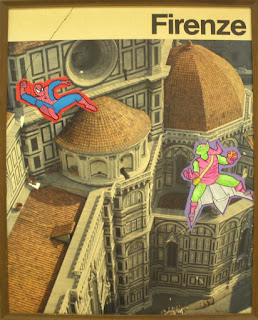 Anchovy: doing his thing with the thrift store paintings. I know Spidey is cool, but it's hard not to root for the Goblin here.


Finally, my camera ran out of battery power before I could get a picture of a few others, so maybe you'll have to go down there yourself if interested. In particular I would've shown the pieces by another comic club friend, Kevin Huizenga. In lieu of that, you can find his work here.